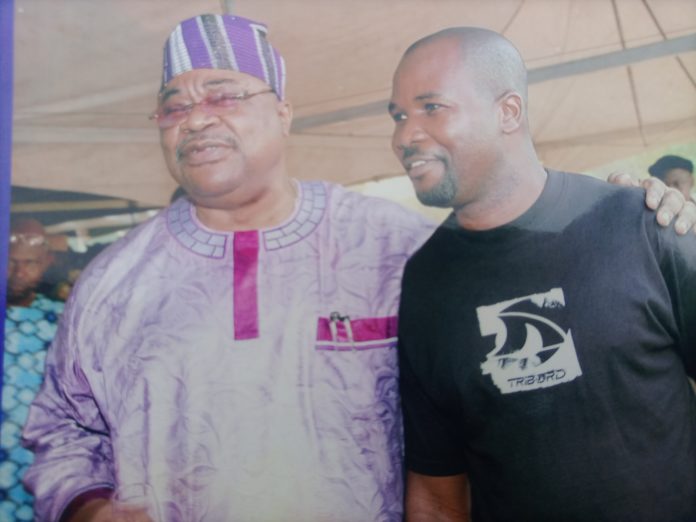 My Journey With Alao-Akala

“I can go on and on, writing about, and sharing, my beautiful and fulfilling journey with the late Chief Christopher Adebayo Alao-Akala, the Ogbomoso-born great man, but space will not permit me here.”

Until the man was laid to rest, that Friday, I was still nursing the faint hope that the news of his death was a rumour; that the giant human being with a beautiful heart will, once again, come to the public domain, with his infectious and throaty laughter, throwing his usual banters at friends and foes alike.

Alas, Otunba Christopher Adebayo Alao-Akala had, indeed, breathed his last on that fateful early morning of 12 January, 2022. I was jolted from my reverie and wishful thinking. Quite saddening, the former governor of Oyo State had gone the way of the mortals; he shedded mortality and joined the immortals.

While we are still mourning the dead, it will be proper for me to put into perspective my relationship, that lasted almost 15 years, with the man whose large-heartedness, sense of humour and human relations, remain objects of positive discourse across all divides, even in death.

How did it all start?

I had some very brief but not personal or close encounters with him during his first coming as the governor of Oyo State, from January to November, 2006, following the controversial impeachment of his boss, Senator Rashidi Ladoja. Throughout his 11-month stint as the governor, I was relating with him from afar.

However, in early February, 2007, I walked into the newsroom in the line of duty as an editorial staff of the Nigerian Tribune. Lo and behold, my then immediate boss and Politics Editor, Mr Olawale Rasheed, handed me a letter.

I was yet to open the letter when Mr Olawale told me: “You have been officially assigned to cover the six-week campaign of the governorship candidate of the Peoples Democratic Party (PDP) in Oyo State, Chief Adebayo Alao-Akala, for the 2007 elections.”

I asked him in protest, why me? Why can’t somebody else be assigned for the job? My boss simply declared that it was a decision jointly taken by the Tribune Management at the level of the editors. He added that the lot fell on me and I have no choice in the matter.

I accepted my fate; I opened the letter and written therein was a request by the then deputy governor (his boss, Senator Ladoja, having been reinstated back to office through judicial proclamation) to Nigerian Tribune, and 17 other media organisations, for a reporter and a photographer to cover his electioneering campaign for the governorship election.

In the line of duty, work started in earnest. The campaign traversed the length and breadth of the entire state; from Monday to Friday of every week. During the six-week period, we were into cities, towns, villages, hamlets and trenches as Alao-Akala was preaching his gospel, trying to convince the voting populace why they should entrust their fate and destiny into his hand and vote for him as the next governor of the state.

We do normally take a break from the campaign on Fridays and return to Ibadan for the weekend. The man would dismiss us and ask us to reconvene the following Monday. This was the routine we were religiously committed to while the campaign exercise lasted. And I was keeping my distance from Alao-Akala.

However, by the first Friday of first week of the campaign tour, he sent for me. I was reluctant to go to him, but some of my colleagues edged me on, saying courtesy demand that I should go and see him. And that marked the beginning of a cordial and beneficial relationship with the Man of Destiny.

When I got to him, he asked me: Are you Dapo Falade of the Nigerian Tribune? I answered in the affirmative. He said: “I have been reading the reports of you journalists on my campaign activities in the last one week. I noticed that it is only Tribune that was reporting me on daily basis, while others were combining two or three-day events to write one report. Why is this so?”

Seeking to defend my colleagues, I told him: “Your Excellency, sir, please try and understand and bear with us. We are following your campaign trail in areas where mostly there is no internet facility.”

Alao-Akala looked at me and asked again: “If that is so, how are you doing it?” I told him that I do send my stories to the newsroom in Ibadan, using SMS. I discovered, at that instant, that he was a man who was addicted to his phone.

He said: “That is incredible. So, you have been using 160 characters to write 15 to 20 paragraphs of news items and also writing regular full page features on me? I am owing you. How much are we giving you and your colleagues?”

I told him that he didn’t owe me a kobo because I am on his campaign trail as an official assignment. I further told him that, though I wasn’t in the office, my salary was not in any way affected since I was away on a duty assigned to me by my employers.

Alao-Akala was not convinced and the humanist in him came to the fore. He looked at me and said: “Young man, forget it. I owe you.” Right there and then, the man deep his hand into his pocket and gave me a pack of N50,000. When I expressed my appreciation, he simply told me that I deserved it because I worked for it.

Alao-Akala did not stopped at that: he made it a weekly ritual and ensured that I was always N50,000 richer every week. By the end of the six-week campaign, I was able to save N300,000, early 2007!!! The saving formed the bulk of the money I used to buy two plots of land upon which I built my only house, so far.

As fate would have it, the man who had been destined to rule over the affairs of Oyo State won the election and he was duly sworn in as the governor of the state on 29 May, 2007.

Some few months after he became the governor, I was transfered to Ekiti State, as the state correspondent. I thought that would be the end of my relationship with Governor Adebayo Alao-Akala. But I was dead wrong! The man will regularly call me and ask: “Dapo, Baba Ekiti, hope you are enjoying your station?”

I always respond in the affirmative. But the good man will not let me be. He will always call me whenever he wants to come to Ekiti State to see the then state governor, Chief Segun Oni. Not only that, he always drop something in my pocket during such visits to Ekiti.

When his electoral victory was finally affirmed via judicial pronouncement, in 2008, I traveled from Ekiti to felicitate with him at his Ogbomoso-country. As usual, His Excellency laced my pocket with some Naira notes.

When I finally returned to Ibadan in October, 2009, I was redeployed to cover the Governor’s Office and also supervise the Politics Desk in the newsroom.

In late December, 2009, I stumbled on Buoda Bayo (as I fondly called him) during the dedication of the Olu Akinkugbe Hall at All Saints College, Gbekuba, Apata. He pulled me aside and said: “Dapo, you are now back in Ibadan? That house that you are building, I will help you.” I was shocked because I didn’t go to him to ask for support.

He saw the shock in my eyes and said: “You are surprised that I know that you have a building project? Well, you journalists are always investigating us. I do investigate you people too. Have you forgotten that I was once a police officer? I know about most of you guys here.”

The encounter was a few days before the New Year. Lo and behold, the man called me to his office on 30 December, 2009 and gave me a handsome money. This he repeated some three months later. Needless to say that his regular assistances greatly helped me to finish the building project which I had roofed before leaving Ekiti.

While his tenure lasted, the late former Governor Alao-Akala was (still is) the only occupant of that seat and office that I have unfettered access to: He was easily approachable; I can visit him in the office with just a very short notice; he responded to my phone calls or he would call back, if he missed my call.

Out of office in 2011, the relationship remained cordial. When I was transfered to the National Assembly to cover the Senate in October, 2012, my immediate worry and concern is how to secure an accommodation. I got an information that former Governor Alao-Akala would attend an event Molete Baptist Church Ibadan (MBCI).

Pronto, I went there to see him and I told him my problem. It was a Saturday. The man looked at me and asked “when are you resuming in Abuja?” I told him Monday and he said: “Just call me the moment your plane lands in Abuja on Monday.”

When I got to Abuja, I did as he instructed. He sent a number to me. I called the person who told me that the Boys’ Quarters (BQ) of oga’s mansion at Maitama has been prepared for me. Just like that!!! That was how I started living a highbrow area of the Federal Capital Territory (FCT).

One thing happened that again reinforced the humanity in the man called Adebayo Alao-Akala. After two months of staying with him, I acquired an apartment at Lugbe Area. I had paid for the apartment before informing him of my decision to leave his house.

Buoda Bayo was not happy with me that I was leaving his house. But I insisted and told him that I have already paid for the rent. The good man did not only refunded the N300,000 I paid, but also added something extra.

I was in his Bodija, Ibadan residence, last June, to deliver a letter inviting him to a ‘Breakfast Meeting’ with the South-West Group of Online Publishers (SWEGOP). Alao-Akala said: “Dapo, you are not happy with me because I didn’t give you a car as I promised. But I know that you are grateful that I contributed to your building project.”

I told him that I will forever remain grateful to him for what God has used him to do for me. He looked at me again and said: “I am very happy that you have taken the bull by the horn to start an online medium of your own. You will succeed by the grace of God.” And that was my last physical conversation with him, though we were talking and chatting on the phone till few weeks before his demise.

I can go on and on, writing about, and sharing, my beautiful and fulfilling journey with the late Chief Christopher Adebayo Alao-Akala, the Ogbomoso-born great man who came and positively touched my life, when I least expected, but space will not permit me here.

As a mark of honour to the memory of the rare gift from God to humanity, the attestation by a highly-respected elder in the pen-pushing profession, Chief Tola Adeniyi, will suffice. He wrote about the late former Governor Alao-Akala: “A large-hearted humanist with infectious laughter. A great man with incredible humility. May God rest your gallant and generous soul.”